News / Why Send the National Guard to the Border? 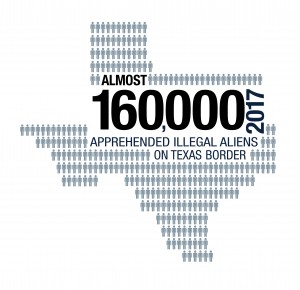 Open borders erode the sovereignty of our nation. We must replace chaos with order, and restore the rule of law.

We ended last year with 2017 totals topping out at nearly 160,000 illegal immigrants apprehended in Texas on the Mexican border. That’s apprehended. Reliable sources in Texas law enforcement believe that for every one detained, two slip through.

Recently in 2018, we have been apprehending over 5,000 per week on the Texas Border.  Customs and Border Patrol agents are undermanned, overworked, and overwhelmed.  Texas National Guard troops can help in a big way.  These troops will be under Abbott’s command with funding from the Trump administration.

I know we are the greatest state, in the most desirable country in the world. I certainly cannot fault anyone for wanting a better life for themselves and their family, and leaving a desperate situation at home behind. But what is happening on the border is bad for everyone, and in the long run good fences make good neighbors.

For more context, here are some crime stats from the border in 2017:

15,450 Criminal Arrests (Separate from fugitive arrests—but are currently involved in any and all other types of crime)

3,181 Fugitive Arrests (People who are already wanted by the law from Federal down to local)

I will continue to support President Trump and Governor Abbott in their efforts to secure the border.