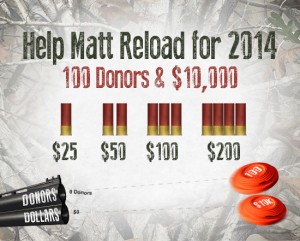 On Wednesday, I will launch a fundraising effort to raise $10,000 from 100 donors in 2 days. Email, internet, and phone calls will be the primary means to communicate.

Will you help me by forwarding the email you will receive on Wednesday to your network of friends and associates? Donations of any amount are welcome. (Click here to donate securely online!)

As things in Washington only seem to get worse, we can’t lose ground in Texas.  I want to stay in the fight. By God’s grace and with support from friends like you, we can get things done.

I need your help this week. Let me explain.

It is hard to believe that my first session in Austin is just a few days from ending, and my first campaign for office ended over a year ago. My time in Austin was spent working on local issues for Tyler and Smith County. But also, importantly, I made many conservative votes in favor of reducing burdensome STAAR testing for public schools, some of the strongest pro-life measures to protect unborn children in the nation, and groundbreaking protections of your digital privacy.

Thankfully I was not alone. As part of the largest freshman class since the 70s, I found myself among many new GOP Representatives willing to stand up against the establishment and the status quo.

But our conservative stand was not well received by the lobbyists and the moderate fixtures in Austin. The state budget was so lacking in fiscal discipline that it passed with near unanimous support from Democrats…but with the most “no” votes from Republicans on a budget in well over a decade. I was one of those votes. Despite immense pressure, we stuck together and formed tight personal bonds.

Now Austin insiders are wasting no time in looking for ways to split us and keep power. They have spread the word that they will find an opponent to run against me this fall, and write checks to do it. No doubt they will recruit a “clay conservative,” someone they can mold to their will, who lacks the rock-solid convictions tempered by solid foundational beliefs. Someone comfortable cutting backroom deals with insiders.

Let’s be clear. The establishment rejects your conservative beliefs and your desire to renew liberty.