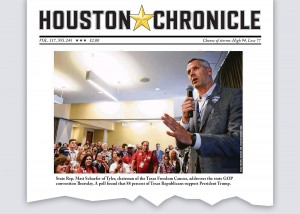 If you live in Smith County, you might be vaguely aware that the Texas Republican Convention recently occurred in San Antonio this summer. And you might have heard through the grapevine that your State Representative, Matt Schaefer, spoke to a standing-room only crowd at the convention.

However, if you live in Houston or San Antonio, this was front page news.

Grassroots conservatives have started a prairie fire, and the Houston Chronicle and San Antonio Express-News were there with pens blazing, and camera shutters snapping. The results can be seen all over the state. The election of a true grassroots candidate, James Dickey, as chairman of the Texas GOP is positive proof.

But the true point of pride for East Texas is that the success is due in large part to the people of East Texas. Matt Schaefer took the stage and applause echoed out the door and down the hall by the elevators where the overflow crowd was waiting. NOT because of Matt, but because there is a bunch of liberty-minded conservatives in East Texas that make sure their voice is heard in Austin by electing people who share their values.

You may not have read about it locally, but if the Republican convention is any indicator, people around the state are hearing the voice of East Texas.

Prev:  Schaefer Amendment Expands Transparency in House Budget Meetings
Next: Why Send the National Guard to the Border?